Historic Arts and Crafts Buildings in the USA

Three of the “founding fathers” of the Arts and Crafts movement in America, whose impact is still widely felt today are the Greene and Green Brothers in California,  Elbert Hubbard and Gustav Stickley.

Over the last year or so my husband and I have visited three famous historic locations and here are my first paintings depicting them!

Anyone who lives in the Pasadena area will recognize this famous structure, the Gamble House, which was a closely supervised project of the  architect brothers, Charles and Henry Greene. 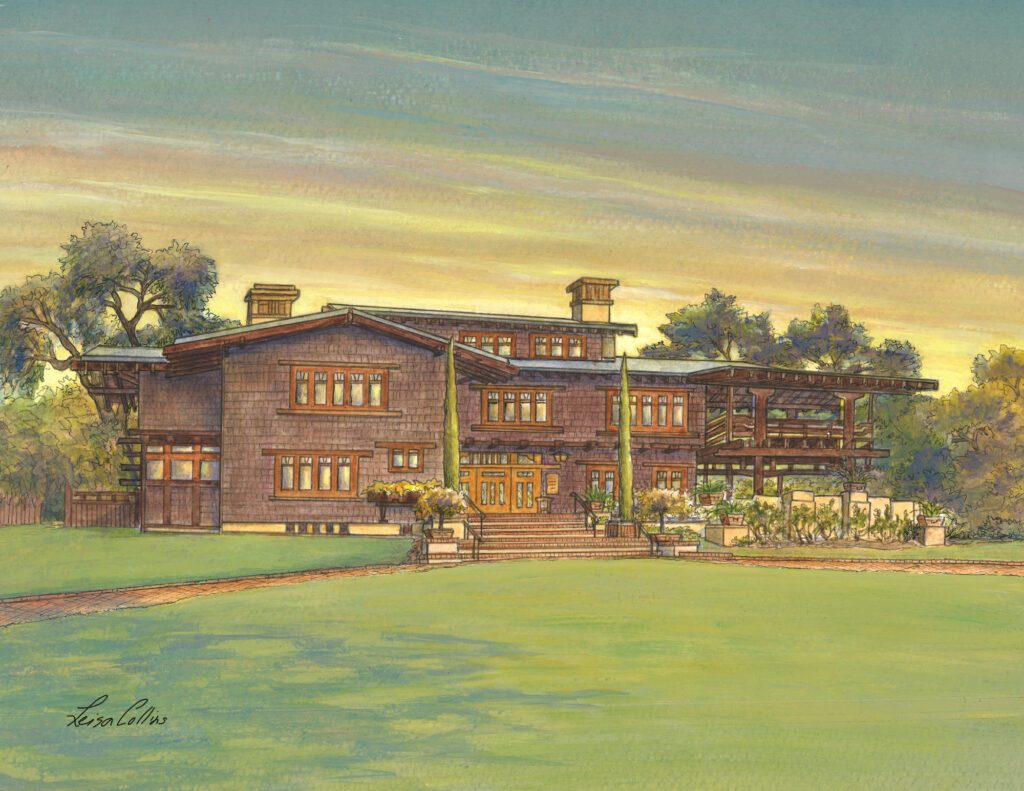 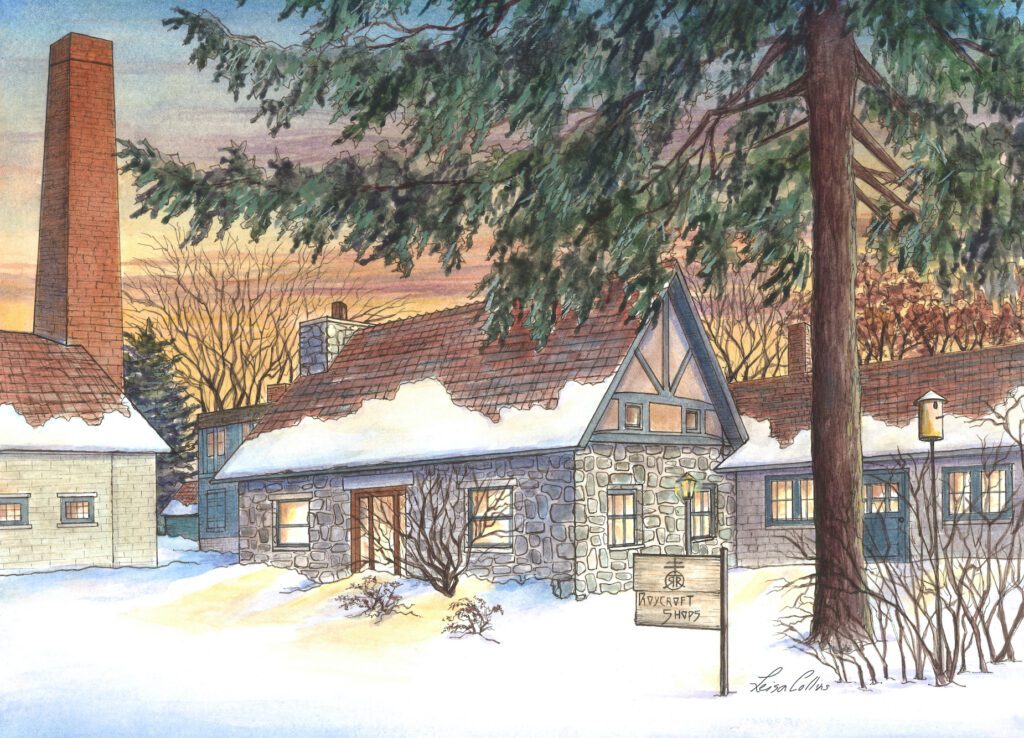 The home of Gustav Stickley in New Jersey, now a historic site and museum in his honor. 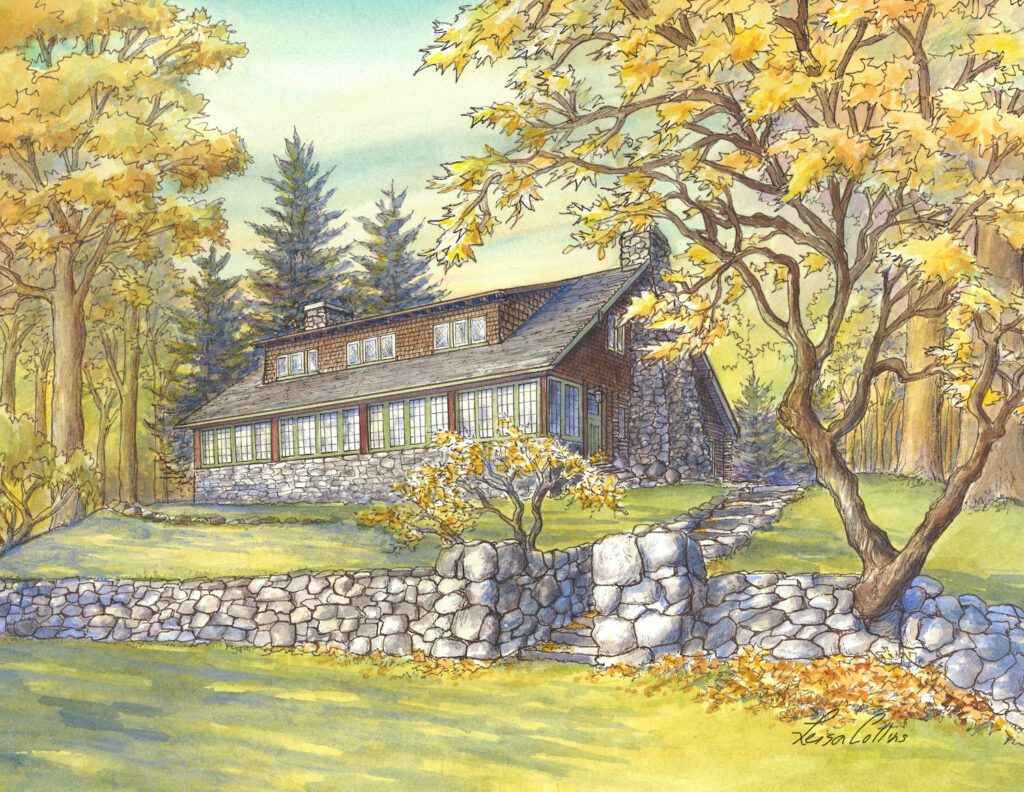 Here is some information about these amazing characters.

Charles Sumner Greene (1868-1957) and Henry Mather Greene (1870-1954) were brothers born in Brighton, Ohio, now part of Cincinnati. The boys spent part of their childhood living on their mother’s family farm in West Virginia where they developed a love of nature that would be ever-reflected in their art.

By the time the boys were teenagers, their father, had moved the family to St. Louis and enrolled the boys in the Manual Training School of Washington University. Here, beginning in 1883 and 1884, respectively, they studied woodworking, metalworking, and toolmaking.

Their father decided for them that the two should become architects, and at his urging, enrolled at the School of Architecture of the Massachusetts Institute of Technology.  Then in 1893, their parents, who had moved to the “little country town” of Pasadena, requested that their sons move out to California and join them. The brothers did so, and the cross-country trip proved fortuitous: while passing through Chicago, they stopped at the World’s Columbian Exhibition and for the first time saw examples of Japanese architecture. Their immediate admiration of the style would become a strong influence on their later designs.

Soon after their arrival in Pasadena, Charles and Henry set up shop together, and the architecture firm of Greene & Greene was born. Their art would culminate between 1907 and 1909 with the construction of the “ultimate bungalows” — one of which is the Gamble House in Pasadena.

Elbert Hubbard’s writings and lectures were wildly popular in his own lifetime and even today one can easily search for Elbert Hubbard quotes and find a cornucopia of wit and inspirational ideas applicable to living an Arts and Crafts style life in today’s modern world.

Art is the expression of man’s joy in his work, and all the joy and love that you can weave into a fabric comes out again and belongs to the individual who has the soul to appreciate it. Art is beauty; and beauty is a gratification, a peace and a solace to every normal man and woman. Beautiful sounds, beautiful colors, beautiful proportions, beautiful thoughts – how our souls hunger for them! – Elbert Green Hubbard

It began in 1894 when Hubbard traveled abroad and met William Morris at Morris’ Kelmscott Press in the London borough of Hammersmith where Morris was already applying his Arts and Crafts ideals of craftsmanship and beauty to the art of printing and binding.

In 1895, within a year of his return to American, Hubbard’s admiration of William Morris had turned into emulation and he founded the Roycroft Press in East Aurora, New York. The name Roycroft means “king’s craft” and was also the surname of Samuel and Thomas Roycroft, well-known English printers who crafted books in 17th century London.

Not short of creative energies, Hubbard expanded the enterprise beyond printing and binding and created a campus community of craft workers and artisans, known as Roycrofters, which became both a commercial success and a pulsing artery of the Arts and Crafts Movement in America.

Expansion of the enterprise over the next several years included the Roycroft Inn, Roycroft Copper Shop, and Roycroft Furniture Shop. It grew from 50 workers in 1899 to 500 workers by 1909. In addition to printing and bookbinding, Roycrofters made Arts and Crafts furniture, leather and copper goods, art glass, ceramics, hand-made rugs, and more.

On May 1, 1915, Elbert and his wife, Alice, stepped aboard the ocean liner Lusitania with plans to travel abroad and ultimately meet and interview German Emperor Kaiser Wilhelm. Tragically, on May 7 the Lusitania was torpedoed by a German submarine 11 miles off the coast of Ireland.

Gustav Stickley was born in 1858. By the age of 12 he had been a stonemason apprentice and an employee at the Brandt Chair Company, his uncle’s furniture factory. He later opened up a furniture store with four of his brothers in Binghamton, New York, and in 1893 he founded the Stickley and Simons Company with Elgin Simons.

In 1898, having studied the writings of John Ruskin and William Morris, he traveled to England to see their Arts and Crafts ideals in action. Stickley sympathized with their beliefs in social reform and the value of honest craftsmanship.

Following his return from England, Stickley stepped onto a new path with heightened ideals and soon became America’s leading advocate of the Arts and Crafts Movement. He bought out his business partner and formed the Gustav Stickley Company.

In the beginning, there was no thought of creating a new style, only a recognition of the fact that we should have in our homes something better suited to our needs and more expressive of our character as a people than imitations of the traditional styles, and a conviction that the best way to get something better was to go directly back to plain principles of construction and apply them to the making of simple, strong, comfortable furniture. – G. Stickley

In 1901 he launched his now famous Craftsman line of furniture and started publishing The Craftsman magazine, the first issue of which he dedicated to William Morris. He organized his workshops in a medieval craft guild style and utilized the name “United Crafts”.

The championed beliefs and ideals such as the following:

Stickley’s run of popularity and success lasted more than a decade and only began to fall apart in 1913 when he moved his furniture operations to Manhattan, a decision that was poorly timed and financially damaging to the company. Stickley declared bankruptcy and retired in 1915 at the age of 57. Publication of The Craftsman magazine was closed down in 1916.

Although the Arts and Crafts Movement led by Stickley and others died out after a couple of decades, a robust Arts and Crafts revival reared its head later in the 20th century, and a renewed and enthusiastic interest in the ideas and Craftsman furniture of Gustav Stickley is today alive and living strong among wood workers, collectors, and homeowners alike.

I hope you have found this information interesting.