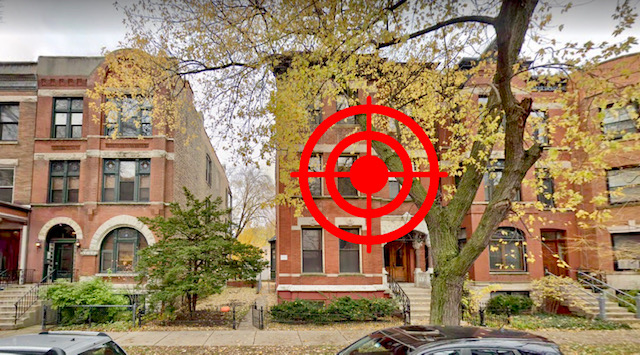 On this day, 150 years ago, Chicago residents were recovering from the Great Chicago Fire. It raged from Oct 8 – 10, 1871, leaving a mass of molding rubble and destruction. The deadly fire killed 300 people and destroyed roughly 3.3 square miles of the inner city. A total of 17,500 buildings were lost and more than 100,000 residents were left homeless.  In true Chicago style, the city rallied its forces and rebuilt. . . this time mainly in brick and stone and other sturdy structures. The buildings were unique, well designed and meant to last.

Who would have thought that a century and a half later, these beautiful old buildings would be facing a new threat of extinction. . . the lethal wrecking ball!

When green demolition fencing goes up in Chicago, you know that’s devastating news for an old building. It signifies it has become a target: a target for destruction and demise. I was alerted last week by a post by #theamericanhome on Instagram that one of the latest victims on the Chicago teardown list is an elegant 1886 Georgian style building at 2236 North Kenmore Ave in Lincoln Park.  A demolition permit has been issued. It sold to an LLC in August for just around $2 million and construction permits have been issued for a three-story residential building.

Nestled within a enclave of historic apartment buildings in Lincoln Park, one of Chicago’s most historic neighborhoods, this building is perfectly situated just south of DePaul University, as well as a host of nearby green spaces like the 14.4-acre Oz Park just to the east. The major intersection of Fullerton, Halsted, & Lincoln is just a nine-minute walk, offering a broad array of retail stores, restaurants and cafes.   With a reported construction price tag of over $1.8 million, ironically, the permit states the project is being built by Promised Land  Development.

The beautiful structure has long served as an apartment building and it can be seen in all seasons, thanks to Google Street View. I also found online listings that show some of the well maintained apartments. Most have hardwood floors, central air, decorative fireplaces and renovated kitchens featuring granite counters and stainless steel appliances.

Now, 135 years later, all those memories are about to turn to dust.

Here is a tiny glimpse  of what is about to be destroyed.

It is a well known fact that the architecture of Chicago has influenced and reflected upon the history of American architecture.  However, with all its rich architectural history, Chicago is facing a preservation crisis. In recent years, many of the city’s most historic buildings — despite being flagged by preservationists for their architectural or cultural significance — are being abruptly demolished.  Today Chicago is one of the leading historic teardown cities in the nation.

Alarmed at the number of historic homes and buildings being lost in Chicago, in recent years I made it my mission to create a series of paintings depicting the historic architectural beauty of this great city.  I also included many of these homes in the Chicago section of my recent legacy coffee table book entitled, Hand Painted Homes: An Artist’s Pen and Watercolor Journey Across America. I was further disheartened to learn firsthand from many of the owners of the homes in my Chicago series, that beautiful 100+ year old homes are being torn down in their neighborhoods. Some told me that they are constantly receiving high dollar offers from developers, and others said that the only reason they have not sold their home is because they are afraid it will suffer the same fate as so many other homes in their historic neighborhoods.

I did not just focus on the downtown area, but wandered through the vibrant neighborhoods and drove down leafy residential streets. From modest Chicago Bungalows to Frank Lloyd Wright creations, bold Mid-Century Modern homes, charming Tudors, Italianates, Colonial Revivals, Queen Ann beauties and Victorian Two-Flats to the grand Greystones along Logan Boulevard, I concluded that ‘architecturally’ Chicago has it all. The question is, how long with it remain that way.  You can see my Chicago House Portrait Series which includes 50 paintings in 15 different architectural styles.

Just to make my point, here are some of the most tragic examples of magnificent Chicago buildings that are now lost for ever.

The beaux-arts 1905 Chicago Federal Building stood for 60 years. Designed by Henry Ives Cobb, the six-story building was capped with a gilded dome larger than the one on the U.S. Capitol. Despite the efforts of preservationists, by 1960 the building had become too small for the business of the government. It fell to the wrecking ball in 1965.

The Adler and Sullivan Chicago Stock Exchange building, built in 1894,  is lost forever, but the structure’s death probably saved many other buildings from the same fate. The city’s preservation movement found its voice when it came down in 1972,  Tragically, when the building was demolished, photographer and preservationist hero Richard Nickel was crushed by rubble while photographing the demolition’s progress.

The castle-like Palmer mansion, designed by Cobb and Frost and completed in 1885, was the first on the Gold Coast at 1350 N. Lake Shore Drive and was at one time the largest private home in Chicago. It was built for Potter and Berthe Palmer. After the Palmers’ son left the home, it was briefly occupied and then stood vacant until it was razed in 1950.

These examples came from an article by Curbed Chicago, and further information can be found there.  Thankfully, Curbed Chicago has been shining a spotlight on Chicago historic teardowns.

These famous examples have been recorded in the annals of history because of their notoriety. I grieve for the thousands of homes and historic buildings that have tragically met the same fate. Their demise is barely noticed in comparison.

The good news is that many is Chicago are rallying to save historic homes and buildings.  Preservation Chicago is also working hard to highlight the teardown problem and they list out Chicago’s most endangered buildings on their website and give information on the actions they are taking.

One day city officials of Chicago will wake up and realize that the architectural legacy of their great city is disappearing. . . one demolished building at a time.  But by that time it just might be too late.

Thanks for reading and caring about this important issue.