I have always enjoyed spending time in Portland.  It’s reputation of being quirky, cool, weird and green all at the same time, makes life very interesting. Its architecture follows the same mold.

One of first things I noticed about the city as we ambled through it’s unique neighborhoods — stopping for coffee far too often — is the number of solar panels on homes.  And not just new homes, historic ones as well. That is always a good sign. I learned that Portland is a leader in the green movement, incorporating this trend into its urban planning over a decade ago.  I discovered a feast of architectural styles and well preserved and maintained homes. Beautiful tree-lined streets and colorful gardens added to the vibrance of some of Portland’s historic residential areas.

My series includes paintings of homes in a total of 17 favorite neighborhoods and in 15 architectural styles that I feel depict Portland. I concentrated on 10 historic neighborhoods for my Portland series. These include Alameda, Beaumont-Wilshire, Concordia, Grant Park, Irvington, Laurelhurst, Sabin, Sellwood-Mooreland, Eastmoreland and Westmoreland.

And there’s another great thing about Portland. If you are travelling by car, you traverse absolutely stunning landscape. No matter which direction you are coming from, whether it’s along the coast, through national forest or the road that winds it way along the Columbus River, it’s always a heavenly experience. In fact I would have to say, that of all the amazing landmass that USA has to offer, this part of the country is most like my homeland of New Zealand. Now that is a really big plus!

The neighborhood of Alameda sits right next to the beautiful Wilshire Park, with sidewalks lined by poplar trees and well-loved homes. Some of the houses were built as early as 1909, when the neighborhood was annexed to Portland. While walking down the streets, we saw many styles of homes including Craftsman, Colonial, bungalows, and cottages.

I learned that the Beaumont-Wilshire neighborhood is in actuality two separate neighborhoods separated by NE Fremont Street, with Beaumont to the south and Wilshire to the north. The two neighborhoods agreed to form the Beaumont-Wilshire Neighborhood Association to recognize their common interests, including their common commercial center of Beaumont Village. There is quite an array of classic bungalow style homes and I have some of my favorites included in the collection below:

The neighborhood of Concordia spans around Concordia University, a private liberal arts college that has helped to shape the community around it.  I enjoyed my time in this neighborhood which I found to be bursting with art and diversity,

The Grant Park neighborhood was named after Ulysses S. Grant who frequented Portland several times during his presidency. The early 20th century homes in this neighborhood are classically styled and I fell in love with several of the Craftsman builds that I came across during my visit. Before I arrived, I did some research about the neighborhood and discovered that Klickitat Street was the setting for Beverly Cleary’s Ramona Quimby children’s books. The Beverly Cleary Sculpture Garden located nearby is a wonderful tribute to her, and I’ve included a photo of one of the statues below. 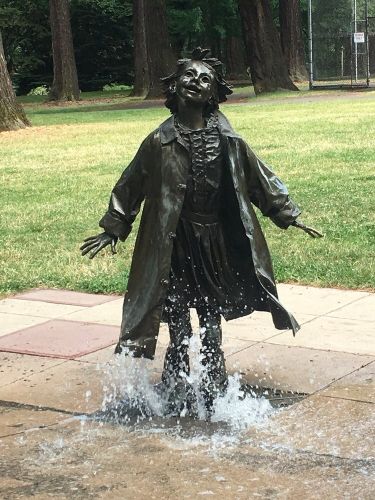 The historic neighborhood of Irvington is a well-maintained area with expansive yards and old, long-limbed trees. I discovered that part of the upkeep of the neighborhood is funded by a yearly tour of the homes each spring, which had the timing been right, I would have loved to attend! Another area with a wide selection of architectural styles that I enjoyed capturing in my paintings.

Like many of the surrounding neighborhoods, Laurelhurst is filled with history. This neighborhood circles around the Laurelhurst park, which has a gilded statue of Joan of Arc, a World War I war memorial, right in the middle. This old neighborhood is located close to Downtown Portland, which gave us plenty of opportunity to explore and enjoy the area.

The portraits shown below are from several different neighborhoods in the area. With so many neighborhoods to see, I wasn’t able to spend as much time in these locations as some of the others, but have a few favorites that I found during my travels.

The Sabin neighborhood became an official community in 1968 and is now known as one of the most diverse areas in Portland. Sabin neighborhood home styles range from classic Old Portland architecture, Craftsman bungalows, Victorian two-stories, Tudor cottages, Foursquare homes and more.

Sellwood-Moreland is the quintessential family neighborhood, with an amusement park, plenty of parks and hiking trails, and locally owned cafes. This neighborhood is technically a combination of two neighborhoods, Sellwood and Moreland, with Moreland being further divided into Eastmoreland and Westmoreland. The landscaping and classic, well cared for houses were a delight to see, and I have several styles included in this part of my Portland, Oregon collection of paintings.

Whenever I create a series of paintings of a particular city, I always study the history of the area.  Knowing that background gives me a greater understanding and appreciation of the city’s architectural make up. I thought I would share with you a summary of what I found.  Much of this information is thanks to the Travel Portland  and PTX History websites.

Portland and the Oregon coast is famous through Meriwether Lewis and William Clark’s exploring the area in 1805, however Native Americans inhabited the Pacific Northwest long before white settlers arrived. This area was home to the Chinook tribe, who sustained themselves by fishing, foraging and trading, many Portland area landmarks — like the Willamette River and Multnomah Falls — were named by these original inhabitants.

When settlers stepped off the Oregon Trail and made their home in Portland, they started giving the area names of their own. One that endures today, “Stumptown,” was an early nickname for the city because of the felled trees that dotted the city’s quickly developing landscape. As a lumber town with seemingly endless expanses of forest all around, the area sprouted up swiftly, knocking down old-growth trees in the wake of its expansion. Pioneers and adventurers flocked to the city from the East Coast, and two — Maine merchant Francis Pettygrove and Massachusetts lawyer Asa Lovejoy — decided the city’s name with a coin-toss, choosing between their respective hometowns of Portland and Boston. Known as “The Portland Penny,” the deciding copper piece is on display today at the Oregon Historical Society Museum.

With its Willamette River location (and proximity to the Columbia River and Pacific Ocean), Portland soon grew into its name as a shipping hub, but it also became a wild haven for sailors who indulged in drink and other vices in the city’s downtown.

Though the city’s original planners developed the downtown wisely (with a gridded structure and small, easily traversed blocks) the infrastructure needed to support a growing region — and ensure its natural beauty — had to be rethought. So, in 1974, the city re-routed a major highway that had disconnected Portland from its waterfront and installed the 30-acre public Waterfront Park in its place. Next, in the late 1970s, Portland instituted an urban growth boundary, an artificial border that restricts development, inhibits sprawl and encourages green space around the city. While Portland will never be able to rewrite history and return the old-growth trees to the region or undo the pollution caused by its rapid growth, these green feats aim to reverse the damage, and ensure that the city’s history and its people have many more chapters to come.

I hope you have found this informative.

That’s it for now.