Another charming and historic neighborhood of Alexandria, Virginia where we spent a lot of time is The Del Ray area. It was a quick bike ride from where we lived in Old Town and quickly became one of our favorite spots. The area is host to an endless array of bungalow homes in every size, color and form. Nearly every bungalow has a sizable front porch and in warmer weather there are always people sitting on them. It is common to be invited–even as a perfect stranger –onto a porch for a chat. In Del Ray, kids still play baseball on the streets.

The history of Del Ray neighborhood began in the early 19th century.  In 1894 rail lines started to be laid in this area, filling the  neighborhood up with Washington, DC commuters who worked nearby. When the Potomac Yard opened in 1906, the Del Ray population exploded. In 1908, the neighborhoods of Del Ray and nearby St. Elmo formed the incorporated Town of Potomac which quickly established its own local government with a mayor and town council and formed local services with a police force and fire service. In 1930, the City of Alexandria annexed the Town of Potomac. The Town of Potomac was added to the National Register of Historic Places with its many Tudor, Victorian and Craftsman era homes and businesses in 1992. The ease of travel around this area made it a popular spot for DC workers to settle ever since.

The Del Ray neighborhood is its own little idealized small town. Businesses are mostly independent shops and dining sitting along a 1½-mile-long stretch of Mount Vernon Avenue. The sidewalks are full of people walking to destinations for dining, errands and coffee. It’s a short hop to several colleges, corporate headquarters and big government offices so it’s a desirable home base for a commuter. Main Street, with its cafes, restaurants and shops, is always bustling with lively activity. The area is full of several popular styles of homes and architecture including Craftsman bungalows and Foursquare homes, Tudors and Victorian era builds.

The name “Craftsman” originated from the furniture designer Gustav Stickley. It refers to the time period mainly after 1910 when this style really became popular. The English designers though influenced this movement — John Ruskin, William Morris and Philip Webb — began work much earlier, in the 1880s. The style, named the Arts and Crafts movement,  desired to show the handcrafted woodwork of artisans using simple forms and natural materials. Some elements of this style had an Asian inspiration.

The term bungalow had its roots in India. In the providence of Bengal a style of single family residence with a thatched roof and central cluster of activity where kitchen, dining area and bedrooms was located in one central living area was called a bangla or bangala. The British colonists in India reused this style for their summer homes. From this the American bungalow form was inspired.

The first American bungalow was built in 1879 by William Gibbons Preston on Monument Beach, Cape Cod, Massachusetts. It was a 2-story informal home house with a resort feel. However, no expense was spared on this summer home as it was of grand size and scale. The standard American bungalow style was a little more simple with all rooms sharing a common kitchen and living area without use of hallways. The style included wood, stone and stucco exteriors with low-pitched roof, wide eaves with triangular bracket, exposed rafters, big front porch, stone pillars and chimney. The structures were usually one or two stories. Woodwork was emphasized with beam ceilings, dark wainscoting, stained glass or leaded glass windows and built-in cabinets. It’s a simple yet refined style celebrating the craftsmen’s woodwork itself.

The Craftsman and bungalow styles spread quickly throughout the American cityscapes and rural places when the building plans appeared in Stickley’s magazine. Later, plans could be purchased from pattern books and other mail-order home plans providers so any American family could build their own home of this style. The Craftsman Bungalow style remained popular for new builds until the end of the 1940s when the Modernism Movement began. Many of these homes still stand today in Del Ray neighborhood, a testament to the excellent craftsmanship that went into these buildings.

Another style popular to the Del Ray neighborhood is the Craftsman Foursquare styles. Keeping in tune with other Craftsman homes, these homes showcased the craftsmanship of woodwork encouraging use of simple lines and elements. The Foursquare gained popularity from 1895 to 1930s at the top of the Frank Lloyd Wright Prairie Craftsman home movement. Wright thought the Victorian-era homes were boxed-in and confining. He started to design homes with low horizontal lines and wide open spaces. The rooms were built with leaded glass dividers and prominent windows which Wright designed himself. Wright claimed his style of Prairie Craftsman was to blend into the flat prairie landscapes. Wright homes were frequently plaster exteriors with wood trim or sided with horizontal board and batten. Later Prairie homes used concrete block. A common offshoot of the Wright styles was the “Foursquare”, thus named for having four sides of equal size like a box.

The Foursquare homes were two stories frequently made of brick, stucco, concrete block or board and batten. Homes had a low-hipped roof with a deep overhang including a large central dormer and a full width wide front stairs leading to a front porch for ample seating. The interiors were designed to be roomy, many designed with 4-rooms on each floor in a square layout. This home style was dressed with features reminiscent of other time periods such as Queen Anne, Mission or Colonial Revival such as bay windows. City lots quickly filled up with this style home from mail-order home kit sources available to most average Americans. This was the case in the Del Ray neighborhood too where these homes remain grandly holding their own for another century to come.

The Tudor style, so popular in England during the 1500s during the Tudor Dynasty, made its way to the USA to become popular in the 1890s. The homes with their Medieval flavor included heavy chimneys, steeply pitched roofs and decorative half-timbering on exteriors sometimes with overlapping gables, parapets, and patterned stonework or brick. The decorate woodwork overlaid the brick or stucco to give an English style to these buildings. The only difference is American homes did not make use of a thatched roof. The look gave the impression of a Medieval cottage especially in the smaller and more simple bungalow style of homes as the trend swept the USA in the early 20th century.

The bungalow style incorporated many 1- or 1 1/2-story homes set around a single living and dining area with bedrooms adjacent eliminating the use of hallways. Long-narrow windows included small panes of glass in retro style in this historic look. This style was enormously popular in the 1920s and 1930s especially in the Del Ray neighborhood of Alexandria. This style often featured striking decorative timber crossbeam rafters and built-ins cabinets showcasing the craftsmanship of the woodwork artisans who built this style.

Victorian cottages that were built around the turn of the century, can also be found in the Del Ray neighborhood. The cottage is commonly a 1-story or 1 1/2-story structure with small porches, gable roofs and bay windows to add charm. The Victorian Industrial Revolution really added their touches to this residential art form including use of asymmetrical home shapes with turrets, bay windows, a large first floor front porch, patterned shingles and much decorative trim work. Due to improvements made during the American Industrial Age, after the Civil War the ammunition factories converted to making mass-produced decorative elements for homes shipped out to any American no matter what the location. The result was the birth of the Victorian home period due to railroad delivery of Victorian decorate elements and home kits. New paint technologies allowed homeowners to boldly paint their new Victorian homes making the “Painted Lady” or “Pink Lady” trend a look still celebrated 100+ years later.

Asymmetrical homes came into vogue during this time. The use of newly developed forced air heating made it possible to shape rooms in a variety of ways starting in the Victorian period, so stoves and fireplaces took on a lesser design usage. These Victorian cottage homes used exquisite woodworking skills on grand wood paneling, staircases, molding and trims with much stained glass work on windows and decorative masonry work on fancy fireplaces finished off the look in many a Del Ray area Victorian home.

I hope you have enjoyed this sampling of portraits that depict the wonderful neighborhood of Del Ray, Alexandria.  If you get the chance to go there, grab the opportunity and walk around the welcoming streets and stop for a coffee and snack at one of the cafes and restaurants you will find on Main Street. As their city slogan so aptly states, “Del Ray: Where Main Street Still Exists”. 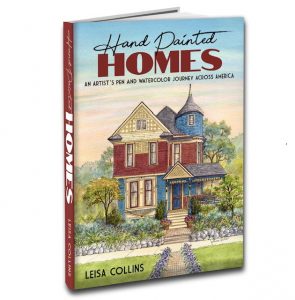 I have devoted a section of my new coffee book, entitled “Hand Painted Homes: An Artist’s Pen and Watercolor Journey Across America”  to the Del Ray neighborhood in Alexandria.  With hundreds of historic homes being torn down every week in this country, I created my book to raise awareness about the need to preserve our architectural heritage.  It is a legacy book and a labor of love that encompasses 10 years of my artwork in all 50 states and I don’t plan to publish follow up editions.

If you would like to find out more about the book, here is a description and some sample pages.  and a link to purchase it if you desire.  Funds from the book go directly to my efforts in this regard.

While I love choosing my own subjects, I mainly do commissioned paintings of homes these days.  Often clients have me create paintings of their earlier homes, the holiday home, the family home they grew up, etc. I’m always honored to do these paintings so don’t hesitate to get in touch.