The sad demise of a historic beauty . . .

Most of us know the famous song, “Meet me in St. Louis” sung by Judy Garland. It’s the theme song of the movie of the same title which was released in 1945. Being that I am now here in St. Louis, I decided I had it was time to get in the swing of things so I watched this old classic. It’s hard to imagine life actually being the way it is depicted, but never-the-less it was certainly entertaining.

The movie is based on author Sally Benson’s collection of short stories which she wrote for The New Yorker. Benson’s maiden name was Smith, and she wrote about her life on Kensington Avenue, St. Louis in the late 1800s and early 1900s. The story is about a family of five children (and grandpa) who live in a grand Second Empire Victorian home on Kensington Avenue in St. Louis.

Of course I got interested in the home and thanks to an article in Hooked on Houses, I learned more about it. I also found out that the house  — which was in fact constructed by MGM for the movie  — was tragically torn down in 1970.

Another Architectural Icon is Lost

MGM not only constructed this home, but they built an entire street of Victorian homes to use in filming their MGM features.  Sadly, all these homes are now gone.

This is how the house looked in 1970, forlorn and unloved, shortly before being demolished. 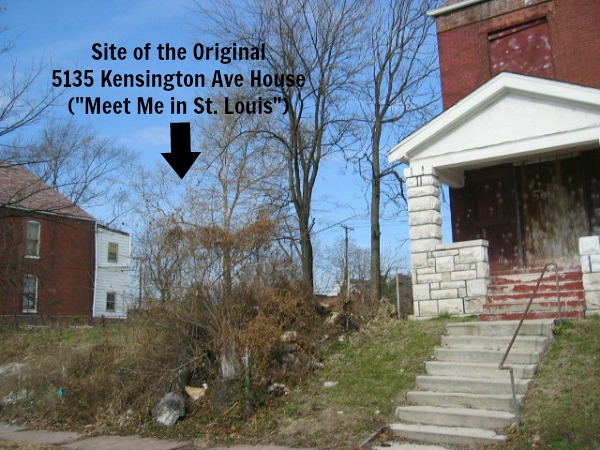 And so it goes. . . . another historic architectural art form is destroyed, joining the ranks of relics that are now lost for ever.  Fortunately, in this case we are still able to revisit the glory days of this home through the Meet me in St. Louis movie!