The breathtaking beauty of Colorado

From the Great Plains to the Rocky Mountains, Colorado is a land of vast geographic contrasts that attracts outdoor adventurers, wilderness lovers and winter sports enthusiasts. However, one can also find towering cities, monumental historic landmarks, charming small towns and windswept ghost towns.

I have always loved Colorado. With its soaring mountains and lakes it reminds me of my homeland of New Zealand.  I include a number of Colorado homes in my coffee table book Hand Painted Homes: An Artist’s Pen and Watercolor Journey Across America  including this stunning log cabin home in Crested Butte in the Rocky Mountains.  Recently The Mountain Ear newspaper in Nederland, CO, featured a story about my book and my feelings about Colorado.

To celebrate my love of Colorado, it’s spirit, culture and architecture, I recently decided to focus on creating a series of paintings of Denver homes, being that this city is not only a favorite of mine but I feel it is an interesting representation of the urban side of Colorado.

Introducing the City of Denver

Known as the Mile High City — Denver is where urban sophistication meets outdoor adventure.  Located at the junction of the South Platte River and Cherry Creek, it’s the state capital and largest city in Colorado. Denver is situated 5672 feet above sea level in the shadows of the Rocky Mountains. Prospectors began settling in Denver in 1858 with the discovery of gold on the shores of Cherry Creek. It was the opening of gold and silver mines in the 1870s and 1880s that first brought prosperity to the growing city.

Today it is an important western hub.  While I have visited the city many times over the years, it was in 2016, when returning to downtown Denver that I noted a distinct change from the downtown I had visited many years before. It was so much more alive, hip, and teaming with people, many on bicycles. Dilapidated older buildings had fresh paint and snazzy signage. Finding good coffee and snacks was now a fun experience.

I found an array of newly built apartment buildings, condos and townhouses, many with rustic elements such as stone and brick interwoven into their design, giving them a Colorado outdoor vibe.  Denver is a great example of downtown renewal and urban living, following a national trend in this direction. Moreover, from my observation, they did it right.

In the last couple of years I spent time meandering around some of the residential areas of Denver and began selecting some of my favorite homes to be part of my Denver house portrait series. Sadly, I noted that Denver follows the national trend where older homes are torn down and replaced by the new.  Some tear downs are warranted but many are not.

However I also noticed that Denver homeowners often went to great length to build new homes that reflect the architectural history of Denver. Others put immense innovation into transitioning their historic homes into larger and more practical versions of their previous structures, creating impressive masterpieces in the process. I selected a number of these homes for my Denver collection as I feel they set a good example of how this can be done with style.

I will no doubt be adding to my Denver house portrait series but feel I now have a collection I am proud of and it is time to share these portraits for others to enjoy.  When I create a series of house portraits that represent a city, I like to choose homes covering an eclectic mix of house types.  The portraits below are broken down into ten different architectural styles which are prevalent in this city.

The Norman Apartment Building on Downing Street was built in 1924 as an opulent estate for architect William Norman Bowman.  Today it serves as a luxury apartment complex with marble walls, 9 foot ceilings, mahogany doors and wood trim and other hand-crafted elements.

It’s main style element is Colonial Revival, but it incorporates a dash of Spanish Revival style as well.  The Norman was entered into the National Registry of Historic Places in 1983.

The Craftsman style home, predominately built from around 1915 – 1935 is a popular style in Denver.  As noted in the captions below, two of these five Craftsman homes were in fact recently built, but in the tradition of the historic Craftsman.

Craftsman bungalows have the same practical and attractive elements as their larger counterparts, the Craftsman home. They always have porches and other welcoming aspects that made the Craftsman homes so popular. As can be seen, most Craftsmen homes in Denver were made from brick, unlike many other states where the homes were built of wood.

Cape Cod homes are an American classic. As with the rest of the country, these houses are prevalent in Colorado and can also be found in Denver and all major cities throughout the state. The majority of Denver’s Cape Cods were constructed after the Great Depression between 1933 and 1956, and the trend saw a revival in popularity during the Vietnam Era. The Cape Cod was an economical choice in that builders could copy the building design without the benefit of an architect.

A fun fact about the Cape Cod. Although the house type is regarded as distinctly American, its actual origin is European. The structure and layout were derived from the compact, one story homes with steep gables and tiny windows that were first built in England and the Netherlands. Eventually, Pilgrim colonists erected similar homes when they came to the Americas in the 1600s. However, they weren’t known as “Cape Cods” until Reverend Timothy Dwight, President of Yale University, made a visit to Cape Cod and saw that the majority of houses were built in this style. Eventually, this architectural type became synonymous with the United States and was symbolic of the country’s architecture. 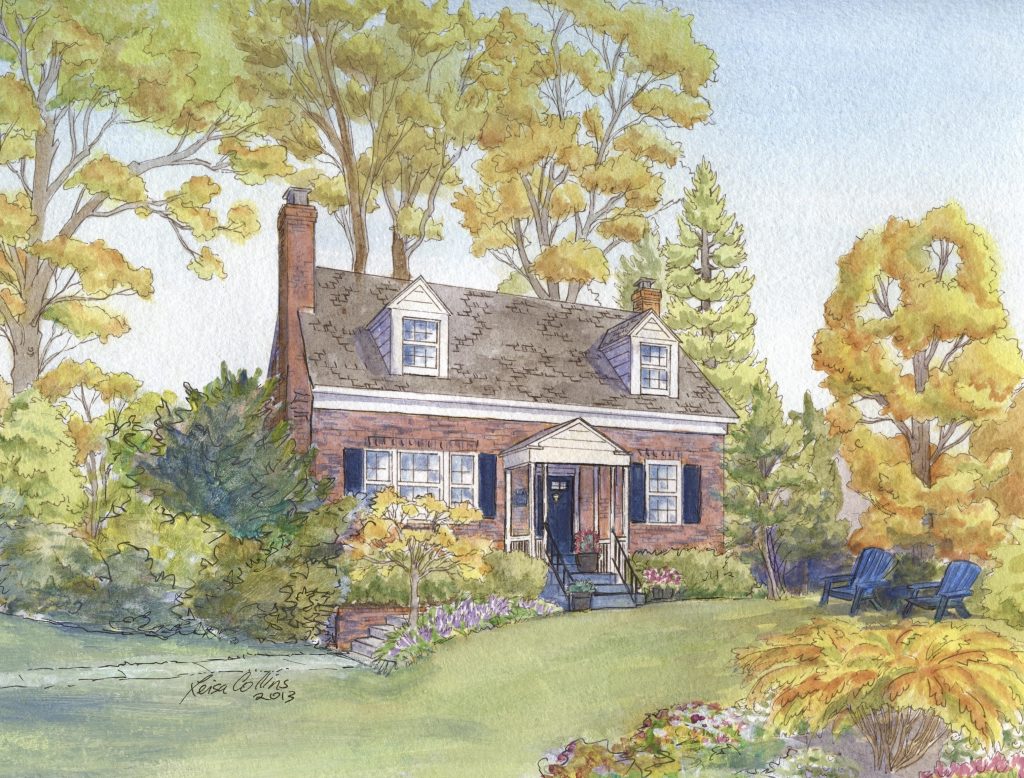 In my opinion, there is nothing worse than building a new house in a historic neighborhood that does not fit the feel of the area. Such a home looks like a fish out of water, or worse still, it looks like the mother ship just landed.  Like most large cities in the USA, there are some unfortunate examples of such homes in Denver, but these homes below don’t fall into this category.  I selected them as they are tasteful and show in each case, that their owners put a lot of thought and care into their design.

Despite having created house portraits in every state across the USA in around 40 different architectural styles,  this is the first time I have come across a home design that captivates the Dutch Renaissance style that one might find in Amsterdam and other parts of the Netherlands and Europe.

Tudor is another popular Denver home.  This style of architecture can be applied to both small and large homes. In a smaller home it has the look of a storybook cottage, while larger versions have the appearance of an elegant English manor house.

These houses, usually made of brick or stone, pay homage to the English Tudor era of the 17th- and 18th-century. They became popular in the United States starting in the 1910s.

Tudor homes share several common features: front-facing gables, a steeply pitched roof; a facade that’s predominantly covered in brick but accented with half-timber framing (widely spaced wooden boards with stucco or stone in between); multiple prominently placed brick or stone chimneys; and windows with rectangular or diamond-shaped panes that bring to light their Medieval-style character. The front doors often have a castle-like appearance.

These are two distinctly different homes built with Victorian style elements. The first is a newly built Victorian farmhouse and the second is a delightful Victorian cottage built well over 100 years ago that has a fascinating history.

Denver, like all bigger cities across the USA, has an abundance of this practical, family oriented home.  Ranch homes sometimes get dismissed as common cookie cutter homes you would expect in equally bland suburbs. But this is absolutely not not the case if you look a little closer.

Ranch homes can not only be stylishly stunning, but very welcoming too. Especially if the right owner comes along.  So I decided to find the perfect Ranch home to add to my Denver House Portrait Collection.   I found just the place, tucked away in an leafy suburb of Southmoor Park

I hope you have enjoyed this little tour of Denver architecture as much as I enjoyed creating paintings of these interesting subjects.

It’s the first day of the year and I will continue to work every day to raise awareness of the need to preserve the architectural history of this country.

Ciao for now and Happy New Year.  May your dreams for 2022 come true!