In 2019, Time Magazine included Hearst Castle on its list of the world’s greatest places to visit, stating, “few places better capture the opulence of early-20th century California than Hearst Castle.”

I attempted to visit the castle many years ago when my mother was here in the USA for a visit. We drove for hours through heavy rain, only to find out when we got to the entrance gate there was no further tours that day due to the storm. That was disappointing, but least I have now had the chance to capture its magnificence in this painting, the latest in my Iconic American Architecture series.

Often called La Casa Grand (“The Big House”), Hearst Castle is the crowning jewel of the San Simeon estate in California. The mansion was built for William Randolph Hearst between 1919 and 1947 in the Mediterranean Revival style and was designed by one of the first female architects in the USA, Julia Morgan.

The estate became a California state park three years after Hearst died in 1951. In 1958, the Hearst San Simeon State Historical Monument was established, and that year the estate was opened to public tours. It became one of the state’s more popular attractions, and some one million people visit annually.

William Randolph inherited land in San Simeon from his father in 1919 and at that time it was known as Camp Hill.  The same year he commissioned Julia Morgan “to build a little something.” Working closely with Hearst, Morgan’s goal was to capture the grandeur of European architecture. In the ensuing years, a series of luxurious buildings were built on an estate that Hearst named La Cuesta Encantada (“The Enchanted Hill”).

With its bell towers and ornate decorations, the façade of Hearst Castle reminds me of a Spanish cathedral The main entrance is flanked by knights, and perches over the massive door is a sculpture of Mary holding the infant Jesus.

The Interior of the Castle

The interior of the mansion is just as opulent as the exterior. Hearst Castle contains 115 rooms, including 38 bedrooms, more than 40 bathrooms, a theatre, library and a beauty salon. The 18th-century painted ceiling of the sitting room was originally in an Italian palazzo and the walls are adorned with velvet fabric.

Hearst’s extensive collection of antiques and artworks is prominently displayed throughout the mansion. 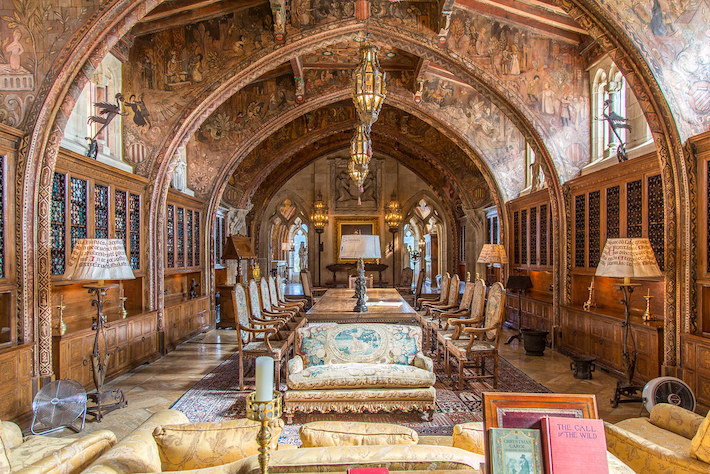 The estate included three palatial guest houses is famous for its two pools. Based on ancient Roman baths, the indoor Roman Pool features blue and gold-coloured mosaic tiles throughout. The Neptune Pool is located outside and it is surrounded by sculptures and colonnades. A waterfall completes this setting.

La Cuesta Encantada is famous for its lavish parties and visitors often arrived via the  estate’s private airfield.

The estate was also once home to reportedly the world’s largest private zoo, with large enclosures which housed white deer, camels, zebras, giraffes and kangaroos.

So there you have it!  That’s the story of Hearst Castle.