My latest Historic Preservation Award goes to a Grand Rapids couple who saved their beautiful Queen Ann home from decay and potential demolition.  Built in 1883, it also happens to be the home that graces the cover of my book, Hand Painted Homes: An Artist’s Pen and Watercolor Journey Across America.

I established the Leisa Collins Historic Preservation Award in 2013 and have presenting the award to outstanding individuals around the country who save beautiful historic structures from the wrecking ball and bring them back to life. The award is an original painting of the saved project.

However, when I chose this home for my cover, I had no idea of the heartwarming story behind the restoration of 231 James St SE. It is a story of blood, sweat and tears and a tremendous love of tradition and respect for the unique Victorian detail that can be found in every aspect of this home.

Here is the home now, as depicted on the cover of my book, Hand Painted Homes: An Artist’s Pen and Watercolor Journey Across America. 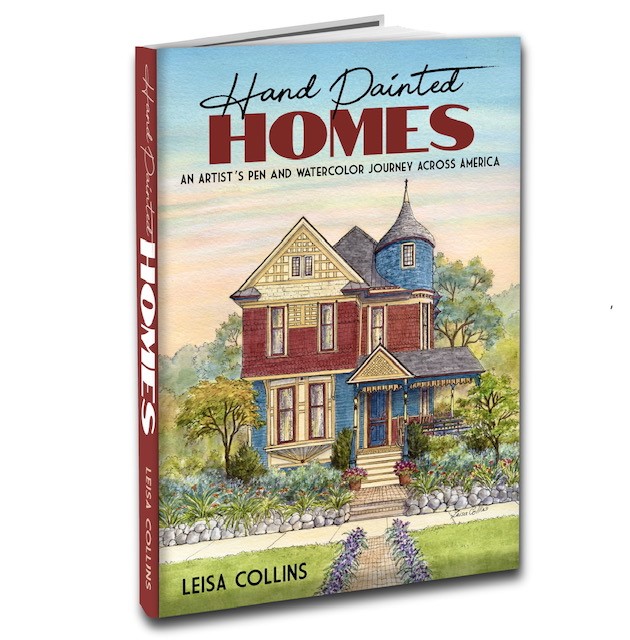 The story of 231 James St SE Grand Rapids, and it’s happy ending, has much to do with the fact that the home is located in the Cherry Hill Historic District.  This was a model revitalization project, undertaken by residents determined to save their neighborhood. By 1991, 25% of Cherry Hills’ homes were vacant and had fallen into sad disrepair. Many were being lost to vandalism and fires and the fate of the homes looked bleak. The turning point for the demise of this patch of architectural history was 1994, when residents succeeded in having Cherry Hill designated as a historic district. Neighborhood efforts decreased the vacant buildings significantly. With the hard work of homeowners, and their use of historic preservation, single-family occupancy and property values dramatically increased and were soon surpassing the city-wide average.

Now, for a little bit of Cherry Hill neighborhood history . . .

Grand Rapids doubled in population between 1840 to 1890 causing housing needs to push out past the boundaries of Heritage Hill, the city’s first and oldest neighborhood. In 1875, a horse drawn streetcar line was installed on Wealthy Street to provide transportation for the development of land east of Heritage Hill.

Cherry Hill became home to the city’s growing middle class. Some of the early residents included builders, salesmen, millers, railroad workers, bankers, attorneys, grocers, clerks and teachers. Even though the builders used pattern books and the balloon-frame construction method, each homeowner added their own style, which resulted in no two homes being exactly alike.

In 1914 electric streetcars were installed on Cherry and Wealthy Streets, providing more efficient transportation for residents of Cherry Hill. With the growth of the transportation system the Cherry and Wealthy Street business districts exploded. Consumers could select from wares offered at neighborhood meat markets, hardware stores, dry good stores, grocery stores and drugstores.

The transformation of 231 James St SE

In the words of Tom Leonard, the following is a summary of the actions taken to restore this lovely home.

“We purchased 231 James SE in June of 2000 to be our primary residence.  It seemed to need everything. It obviously had not had a thorough overhaul in many years.

Our strategy was to live in the home as we improved it, to do much of the work ourselves and to give the home a meticulously Victorian exterior.  We wanted to be true to the original architecture, reuse as much of the original material as possible and hopefully, give the house a shot at seeing its two hundredth birthday.  Helping us was the fact that the house retained its original floor plan, its original woodwork (oak, butternut and gumwood) and other characteristics.

We worked on everything.  There was not a surface or system anywhere that did not need repair. Here are a few of our more consequential projects:

Exterior paint:  We selected five paint colors appropriate for a mid-1880’s home.  All the paint including the all purpose primer was high quality latex.  The color palette and design were based on 19th-century reprints.  We chose a semi-gloss finish.  Once the job was completed, we kept it fresh by repainting about 20% of the house each year.  Much old paint had to be scraped off or removed with a heat gun.  Broken shingles were glued back together when possible.  We even used the original-style cut nails when replacing clapboard siding and reused old nails that were still good.

Back porch:  We designed and constructed the screened porch ourselves from scratch.  It was intended to coordinate with the rest of the house and to look like an original feature.  A local contractor installed the copper roof and gutter system.  The railing was built to match the front porch railing.  We moved a kitchen window and added an Eastlake-style door to accommodate the porch and kitchen.  The brick patio used recovered street paving brick.  The adjacent cellar door was rebuilt twice before it worked.

Roof:  Our tear-off found areas of original wood-shingle roofing. We added ventilation and rebuilt problem areas with sheet copper.  The original Yankee gutter system was reproduced in copper.  Copper cresting and finials from the W.F. Norman Corporation were added to the front porch and the original turret finial was taken down, rebuilt, and reinstalled.  The asphalt architectural shingles were intended to suggest blue slate.

Interior:  We painted the interior ourselves.  We had to duplicate a number of wood moldings and millwork to replace missing items. Susan made all the drapes, curtains and portieres. Wallpapers came mostly from Bradbury and Bradbury.  We added an ornamental electrified fireplace in the front parlor, using a salvaged mantel and new encaustic tile from Tile Source.  Baths and kitchen were updated and windows repaired and rehung.  Since the home had originally central heat, we were able to install force-air heating and air conditioning.

Basement and Foundation:  Most worrisome in the condition of the basement were the splits in the joists of the timber-framed floor and the winding basement staircase, which was falling apart.  All these had to be repaired or replaced.  We made our own compatible lime mortar to repoint the stone foundation and we rebuilt and reglazed the basement windows.

As much as we did in our fourteen years at 231 James, we had to leave many tasks to future owners.  Also, we are not the only ones who have done good work on the home during its lifetime.  Much fine work was done by previous owners and the current owners have carried on the tradition of respect for the old home’s past.”

One of best things about the sale of the home in 2014 was that the new owners, Christine and James Mapes-Pearson, have approached the task as the new custodians of the home with the same love and meticulous attention to detail. While leaving all the work that Sue and Tom poured into the home, they have made further improvements as well.  They toured us through following my presentation to Sue and Tom.

Inside the home as it  looks today:

Following the presentation, Christine and James graciously invited us to tour through their home.

I hope you enjoyed the tour of this wonderful Victorian.

I would like to give a final thank you to Tom and Susan Leonard for their heroic efforts and sincerely thank James and Christine Mapes-Pearson for continuing to carry the torch of historic preservation.

As I mention in the dedication of my book, this country would have only a fraction of the historic homes we enjoy today, if it weren’t for homeowners and their dedication to saving old homes and breathing life back into them. It is my belief that it is the homeowner who is often the unsung hero of this story. Hence my decision to create my Historic Preservation Award and play a small part in honoring these stellar individuals for their much appreciated time and efforts.