Presentation of my award in Tarpon Springs, Florida.

I am currently in Florida and in travel mode, while working on new house portrait subjects for my coffee table book. I soon discovered that the most unique thing about Florida architecture is the color palette  – from soft coastal pastels to striking bursts of orange, blue and gold.

I was introduced to the laid back coastal city of Tarpon Springs by a friend who lives there. Not only is it the most historic city in the state but Tarpon Springs has the highest percentage of Greek Americans of any city in the US!  And being that I love Greece … I decided to look further.  In the early 1900’s sponge diving was introduced to the city by recruiting Greek divers and soon the sponge industry became one of the leading maritime enterprises in Florida.

I was happy to learn that Tarpon Springs sets an excellent example of a community that believes in the preservation and restoration of treasured homes and architectural landmarks. And thanks to the help of a savvy historic preservation leader in the area, I was led to a project that truly deserved my Leisa Collins Historic Preservation Award.

So without further ado, I am proud to announce my latest awardee is Joseph Kokolakis, the President of K.J. Kokolakis Contracting Inc. in Tarpon Springs.  This is a true story about a potential villain who turned into a hero. At first Mr. Kokolakis reacted like many developers  with regards to a c. 1915 Craftsman bungalow that sat alone and dejected on an large lot he had purchased near downtown Tarpon Springs in order to construct a new townhouse project. Demolish it!  His request for demolition was disapproved by the city however. Rather than fight against it or find a way around the denial, Mr. Kokolakis had a change of heart and decided to work with the historic society and city and instead save the home from extinction.  This involved the costly action of moving the entire house to its current location and then rehabilitating and restoring it.

So this story is one with a happy ending and serves as  a great example of how a historic bungalow can be revived from the dead instead of it becoming just another statistic of historic destruction for the sake of urban development. The “unveiling” of the painting and presentation of the award took place outside the restored bungalow.  It was an honor for the Mayor of Tarpon Springs, Chris Alahouzos and preservation leader, Phyllis Kolianos, in join me in making the presentation to Mr. Kokolakis along with 40 members of the local community.

Before… during… and after photos of the project

Prior to the painstakingly four-month  task of rehabilitating and restoring the home, it was relocated to a lot across the street; its new address being 108 N. Ring St, Tarpon Springs.

The first action was making the home structurally sound, dealing with rotting wooden sections of the house, replacing the window sashes with energy efficient windows and rebuilding the porch and wooden railing. At all times care was taken to ensure the exterior of the home stayed as true as possible to its original from. Changes were made to the interior of the home and while it still fits with the Craftsman era, the floor plan is now more open and practical for modern living. When painting the exterior of the home, a dash of modern color and flair was applied to give the home a breezy Florida coastal feel.

Here is the “after” painting of the newly restored home that I created for the award! 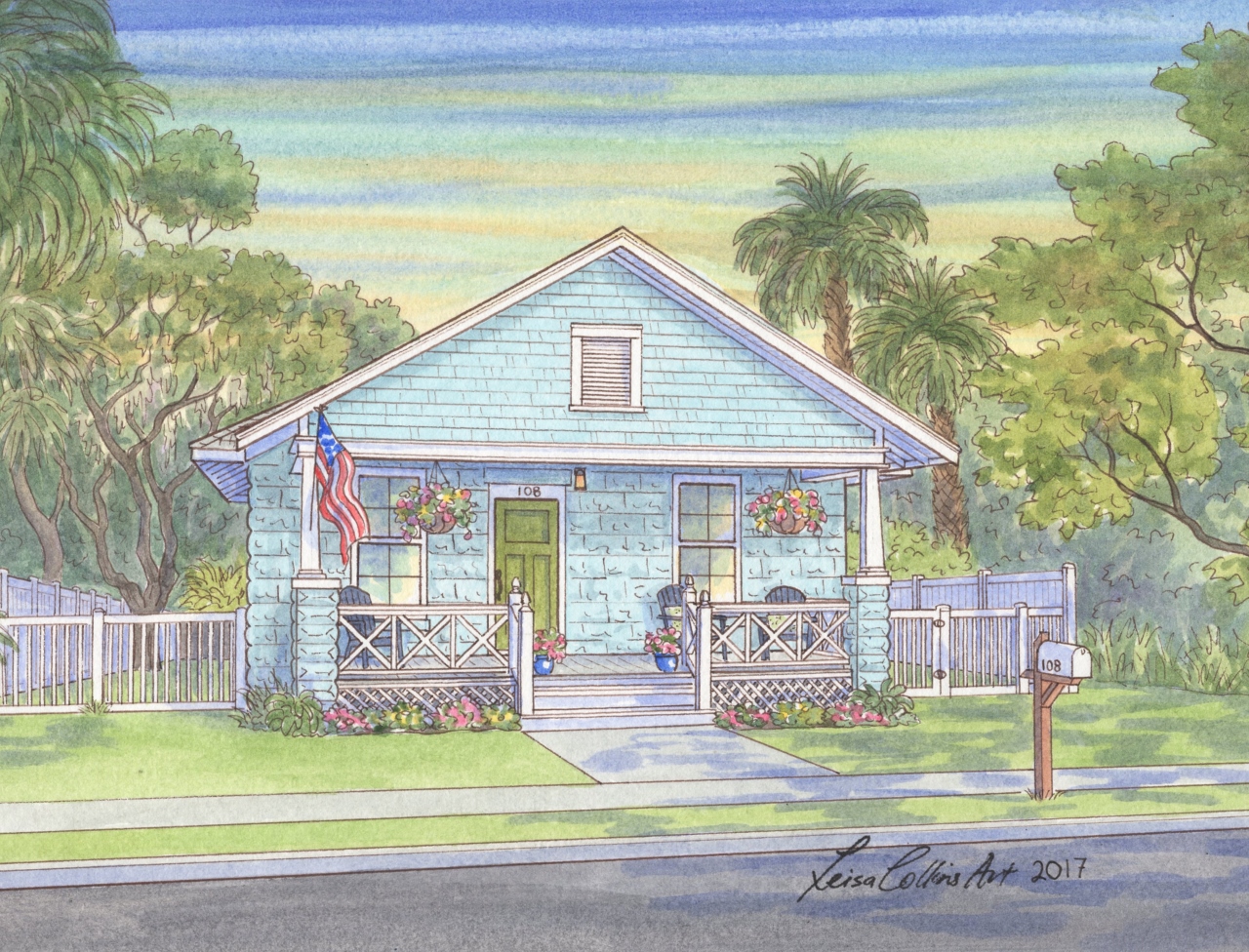 More about the awardee:

Mr. Kokolakis and his company Kokolakis Construction Inc. have worked on a number of historic city projects, thus bringing to life abandoned and rundown buildings, many of which were slated for demolition. To date, Mr. Kokolakis has successfully completed three other Florida historic projects.

The Stirling Commons project in downtown Dunedin consisted of two abandoned buildings in complete disrepair and scheduled for demolition. The renovated structures now offer nine retail storefronts; seven executive suites; twelve art studios; and two art classrooms. Today the development of this site draws significant foot traffic, which existing merchants have benefited from immensely. The facility also marked the return of the Dunedin Fine Arts Center to the heart of the downtown retail and entertainment district by providing a new home for the center on the second floor of the facility.

His first Ybor City restoration and transformation project was a five-story 45,000 sq ft historic brewery which was built in 1896. The scope of work entailed the renovation/conversion of the historic brewery into offices and retail space. All the masonry was tuck-pointed, the historic tower was rebuilt with a standing seam copper roof, new windows and a built-up roof system were installed and all interior spaces were completely renovated. The difficult task of maintaining the historic integrity of this 19th century structure, while updating it for 21st century occupants, was met through constant communication and cooperation among team members.

His second Ybor City project was a joint venture with Ybor City and the City of Tampa which resulted in the rescue and rehabilitation of a single story 1926 building affectionately known locally as The Bunker. In the early days this building was a café for the resident Cuban cigar rollers and throughout the decades it often served as a shelter and meeting place for a number of city and ethnic groups. It eventually became neglected, rundown and abandoned.

Through efforts of the Ybor City Museum and the City of Tampa, The Bunker was literally plucked from the depths of darkness and relocated to the beautiful historic district of Ybor City. Mr. Kokolakis and his company lead the charge in performing a complete historic renovation to bring The Bunker back to life. The historic renovation consisted of a custom stainless steel bar, exposed framed structures, a covered entrance canopy and a delightful open patio which serves as a relaxing place to enjoy a glass of wine. Today The Bunker Café is again a popular meeting place that brings people together for food and drink and good times. The rebirth of The Bunker has drawn much positive attention to the historic district of Ybor City.

Thank you to all to contributed to this special and fun event!

Read more about the event in this article from The Suncoast News.