I get to meet a lot of great houses with my occupation, but I also have the pleasure of meeting many wonderful homeowners.

This is one such homeowner in Wilmette, Illinois.

The beginning of their “once upon a time’ story was July 7, 1995, when Tim and his wife Pam took on a dilapidated Victorian built in 1893. The home had unfortunately been stripped of virtually all its charming Victorian “gingerbread” features. And like others who tackle such a herculean task, the couple battled through whatever was thrown at them to make their home beautiful once more – while bringing up a family at the same time.

Here’s how their home looked when they purchased it.

This is the painting I just completed of this charming Wilmette home as it proudly stands today. 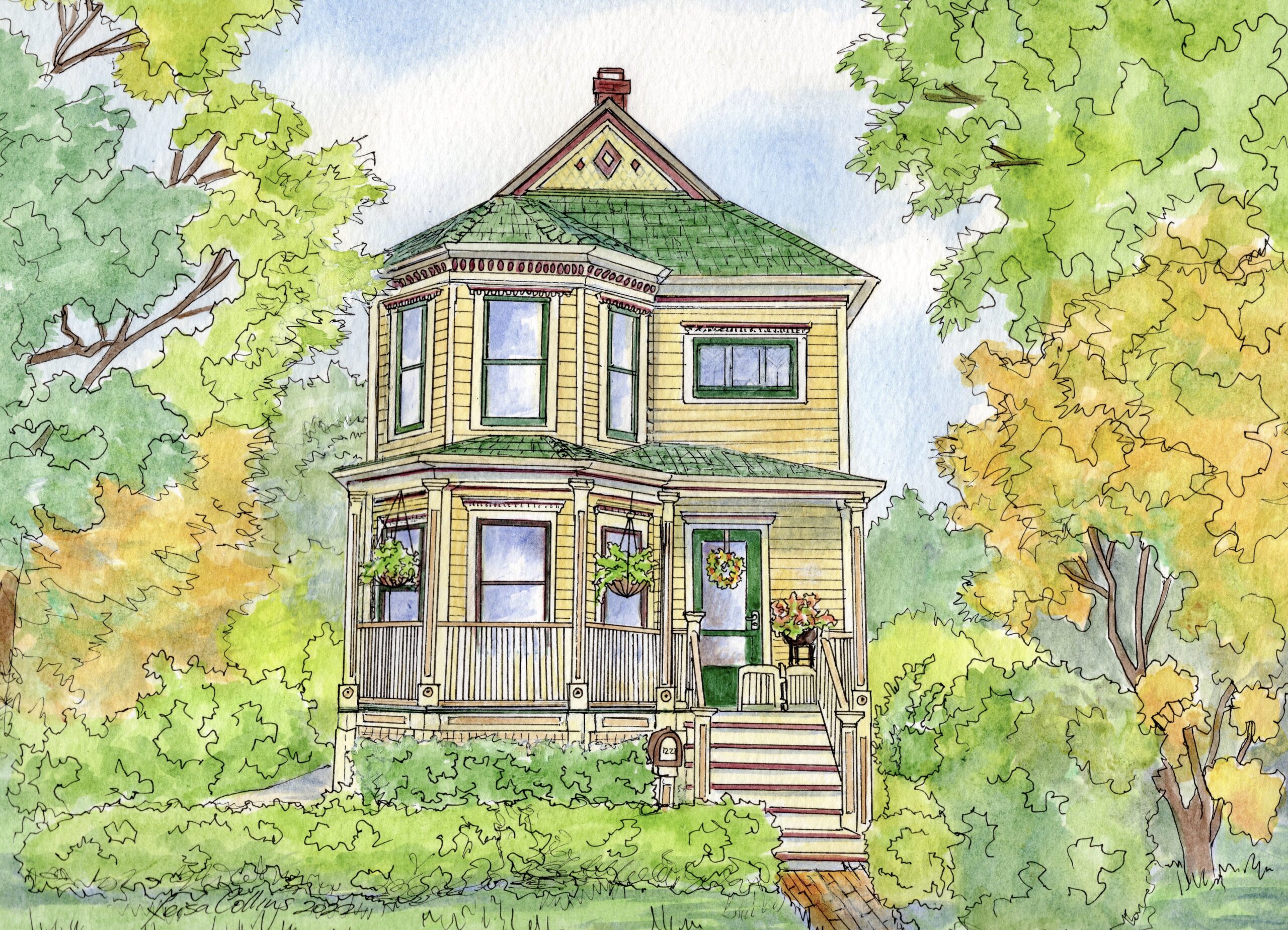 Tim provided the “before” photo and was also kind enough to share a story he wrote about his experience. With Tim’s fine sense of humor, I found his account both heartwarming and funny.

I have included an excerpt below. Like many of you, I have lived in and owned historic homes, and I am sure this story will resonate with you just as it did with me.

Draft of a Chapter from Working With Our Hands

“As I worked through the house in those first months of occupancy, I began to realize that even if features of the house had been remodeled many times (floor coverings, porch configurations, cabinetry and so forth) the major alterations had been carried out by one man who I saw as my architectural nemesis—a do-it-yourselfer from, I imagined, the 1950s or 60s, who had a subscription to Popular Mechanics that told him (and I’d seen this ad in old copies) “Get Rid of All That Gingerbread!”  The popular style of his era was modern and sleek, he read, so he replaced every inch of the complex- profile eight inch baseboard, every foot of smoothly channeled door casing, every elaborately decorated base and plinth block in the house, with pine ranch molding.  He could leave the delicate picture molding that framed the ceiling of every room because of another article he’d read in Popular Mechanics, probably entitled “How Victorian High Ceilings Inflate Your Heating Bill.”  It told him he didn’t need ceilings at 9 foot 3 anyway, so once he’d slammed a set of 2×4 ceiling joists into the plaster walls at an eight foot height and nailed up a new drywall sub-ceiling, he’d killed two birds with one stone: the Victorian picture-molding was no longer an eyesore, and since now the heat could no longer rise as far, every room was now that much warmer.  Whoever he was, he must not have been claustrophobic.   And finally, neither was he very warm, as I later discovered, since the original vermiculite and wool insulation in the walls had fallen to the bottom of every stud bay in the house, leaving the walls mostly exposed to whatever wind made its way beyond the now double-sheathed (for we will get to what he did to the outside of this house) walls.  Or perhaps he knew this, so instead of removing cracked plaster walls or worn floors, at every juncture, he simply added, freighting this scanty-dimensioned balloon-framed structure with a tremendous load of plywood, asbestos vinyl, sheetrock, and all of it nailed and nailed and nailed again.  If the joints didn’t match, there was always more caulk at the hardware store.

“Of course he didn’t stop on the inside.  Looking at pictures of the real estate ads from 1956, when he bought the house from (as I later learned) Alva and Clara Mitchell, it seems his most radical act of transformation was to tear off any exterior trim that was in the way, and wrap the entire exterior with what was then a popular and durab require, or even allow, a new coat of paint.  Replace the handsome porch railing detail with painted treated lumber from a discount big box store, and this is the curb appeal my wife and I had to overcome in buying the house in 1995.

“It would take twenty years for me to reach the second stage of my relation with this place—the point where I found everything more or less where it should be.  By this le ten-inch white aluminum siding, which, however faded or dented over the years, would never time I had removed everything my predecessors had added to the original house’s frame (along with what had deteriorated or had been damaged in the original), and then with some attention to the original architectural idiom of the house from 1894, added features that a family of four would find convenient in the 21st century.  Doing the work myself, one might imagine I saved enough to make it all worth the investment, but who’s kidding who.  I basically bought a house and spent twenty years replacing it where it stood, every stick, pipe, window and wire.”

Thanks, as always, for your interest in the preservation of this charming home.  Thanks also to Tim and Pam and for those who also helped to make this happen!

This country would only have a fraction of the historic architectural fabric is enjoys today if it weren’t for passionate homeowners such as this couple.