Since I was a child, I have always been intrigued by the fusion of old and new buildings, how they intermingle into the now, occupying the same space and time. Within their walls, their structures tell the story of the struggles and triumphs of humankind, often spanning hundreds and sometimes thousands of years.

I am proud to announce that I have now completed the first three pieces  in this series and I am in the process of creating more. The medium is my signature pen and watercolor on a heavy watercolor paper. All depict cities that I love and  where I have have spent time.  In addition to viewing the final paintings, I thought you might like a glimpse of the creative process that has gone into them.

The first painting in this series features a building that does not usually come to mind as a well known New York City icon.  This fascinating structure sits on the corner of Lexington Ave and E. 55th Street with modern high-rises towering above it.  The New York Central Synagogue was built in 1872 in the Moorish Revival style. Regardless of the fact that modern edifices have sprouted up all around it, the synagogue continues to stand apart as a jewel in a sea of architectural diversity. 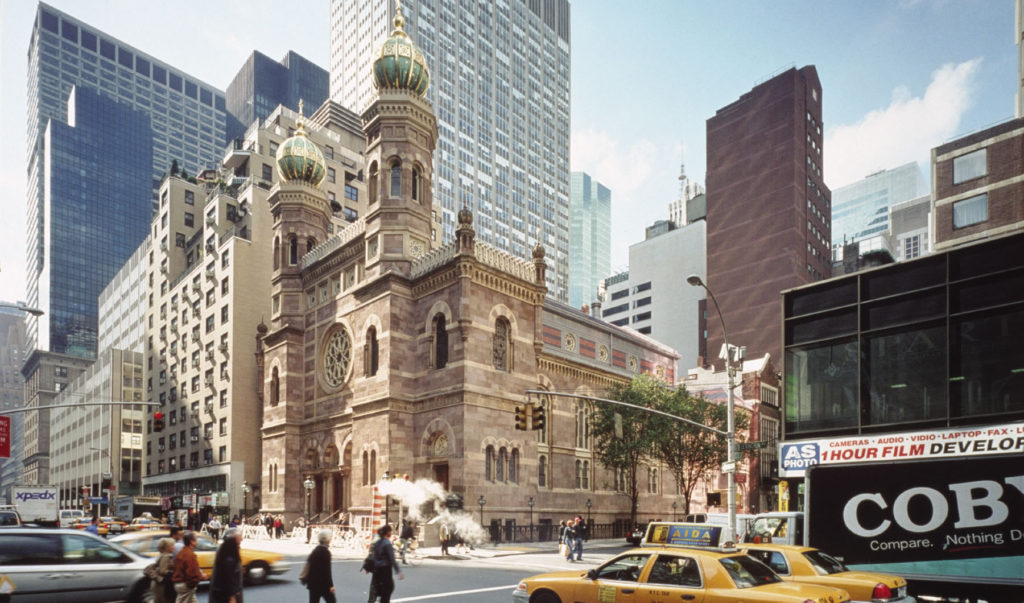 This is the street view, however I wanted to find a more interesting aspect in order to highlight the beauty of the architectural detail. After playing with different angles, I decided on this one and this drew this initial rough sketch. 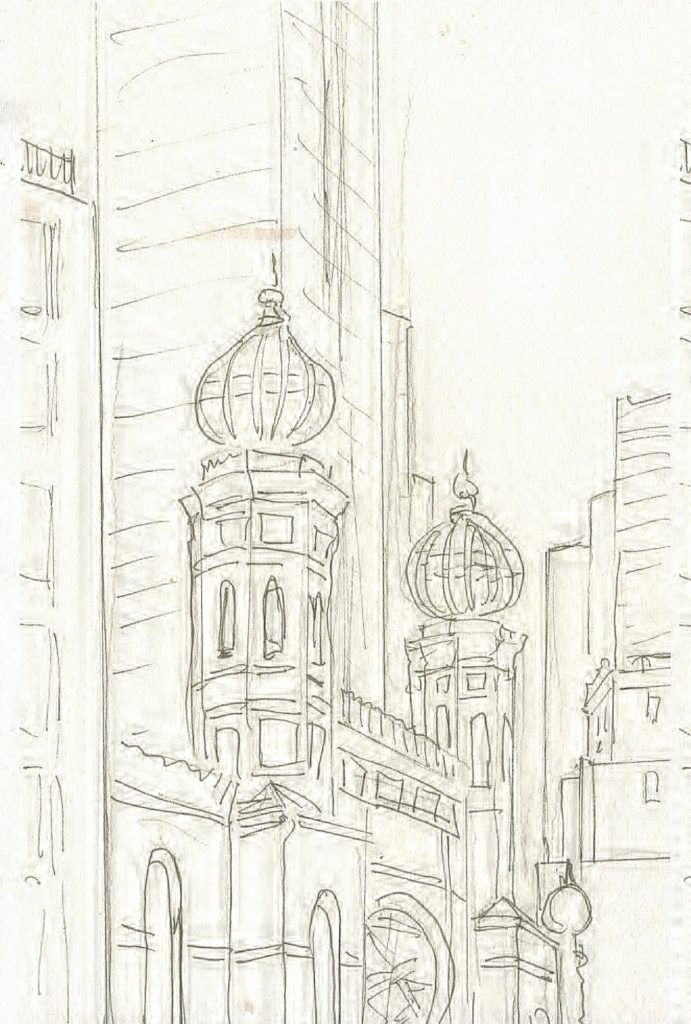 Once establishing the basic form and outline of the painting, the next step was to work out the color contrasts and tones.  I did a number of small samples to see what I liked best. These are two of my final samples. 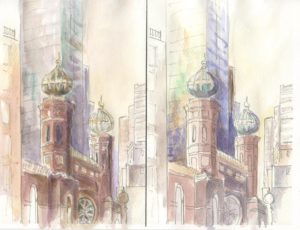 The next step was to complete the pen drawing and following that I applied the watercolor paint in multiple layers.   It’s not that easy to see in the scanned image, but I added some water-based iridescent gold paint to the golden aspects of the rounded designs at the top of the towers. This is much more visible on the original painting.

The second subject is in a city I have always loved spending time in: Paris. With this painting I have attempted to capture the timeless fusion between the romantic contours of historic buildings which are juxtaposed against the distant skyline of modern structures – their angular forms glistening in the last rays of a setting sun.

Again, I had no urge to paint one of the well known iconic views of Paris, such as the Eiffel Tower, for this series.  I wanted to find a strong contrast between buildings that span three centuries or more.  Using photos I have taken in Paris over the years, this was my initial rough sketch which lays out the general form of the painting. 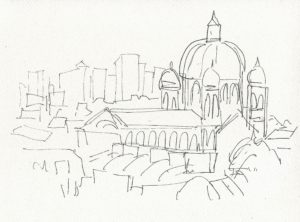 Again, this was followed by a number of color studies.

Then I did the pen drawing and finally the watercolor painting on top of this. As with the New York painting,  I added  some iridescent gold highlights on the dome.  And here is  Architectural Fusion #2 – Paris Cityscape.

The third subject I discovered in Toronto some years ago.  Located at the corner of Queen and Bay Streets, Old City Hall was built in 1899 and is one of the most prominent monuments in the city.  Most historic buildings are constructed of one stone, or maybe two.  This masterpiece includes sandstone from the Credit River valley, grey stone from the Orangeville, Ontario area, and brown stone from New Brunswick. 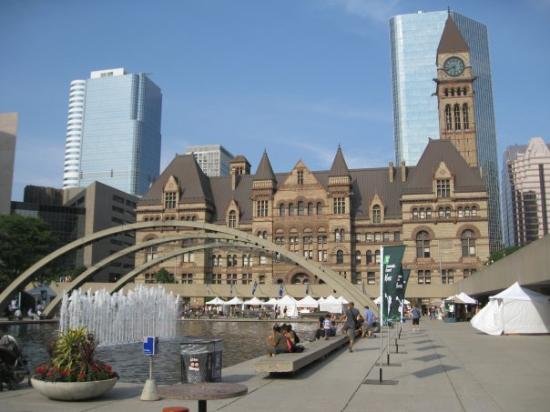 I was especially drawn to its massive clock tower that once was the highest peak in the city. It now reflects brightly in the mirrored facade of a gleaming skyscraper.

You are one of the first to see my first Architectural Fusion paintings and I’d love your feedback and comments.  I am interested to know what they communicate to you, which do you like the best and why?

Of course they are for sale!  So if you have the sudden urge to whip out your credit card, you can go right ahead!  The originals are available (if you would like to buy an original contact me directly at leisa@leisacollins.com) and for the first time I am also offering prints, in a broad array of sizes and framing.

My goal with this series is to be able to offer these paintings in many different formats, from smaller matted and framed sets like these examples below, which you can just hang on your wall; 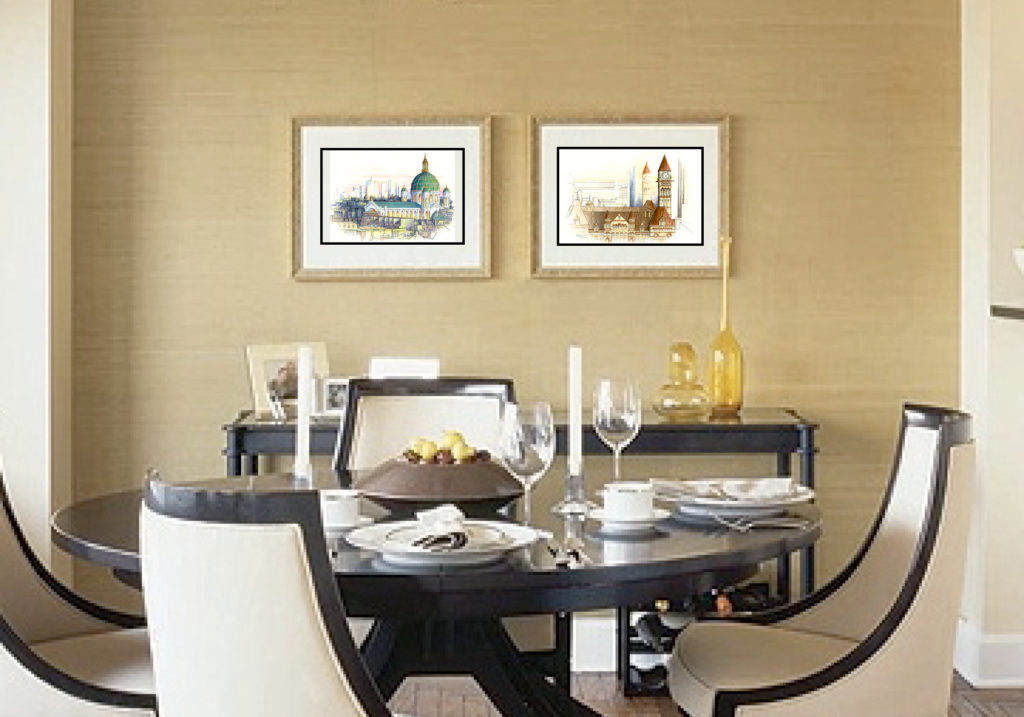 to a larger matted and framed size that is printed on watercolor paper, like this; 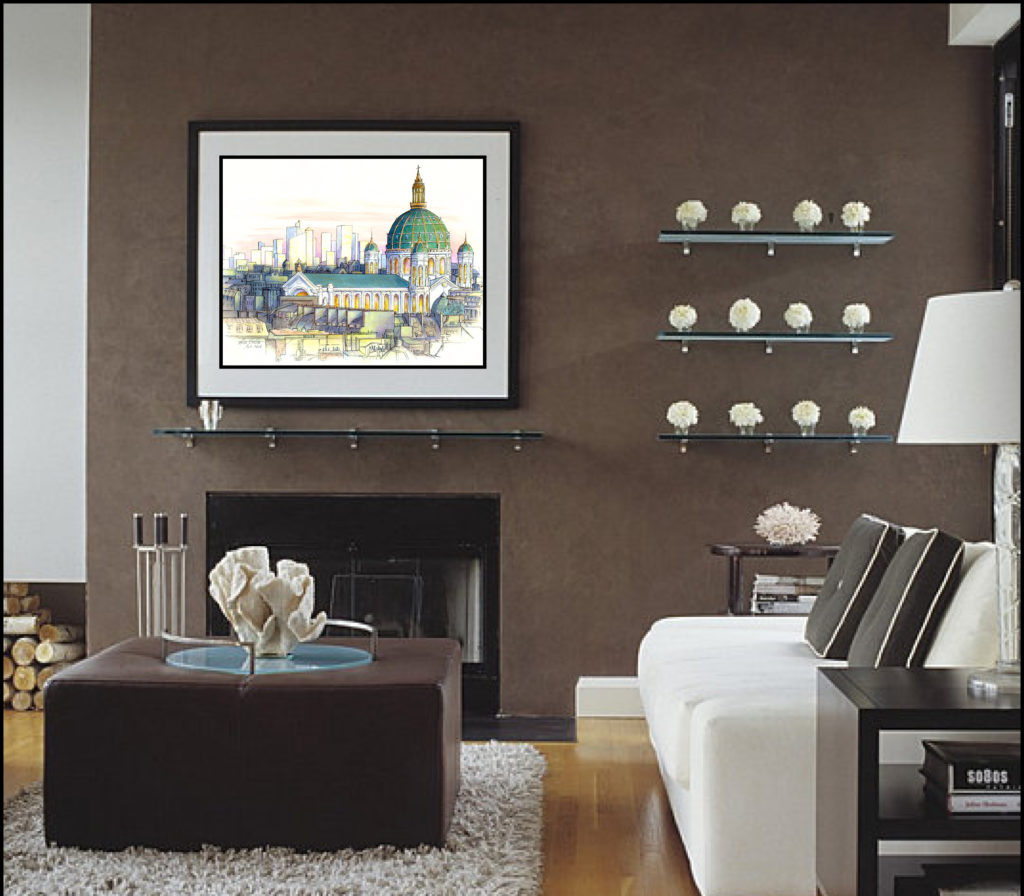 and larger sizes still, such as this, which can be a main feature on your wall.   The painting in this case is printed on stretched canvas. 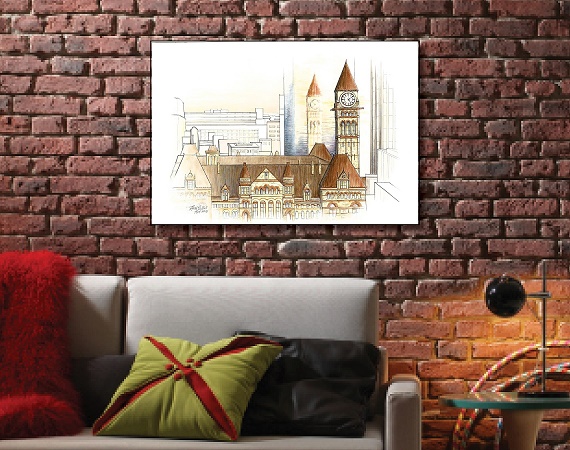 Click HERE for all the info re sizes, formats and prices and to purchase prints. And please feel free to give me your thoughts about my new work.  As you know, it’s always great to hear from you!