When staying in Pasadena California we found the perfect place to live and work. Here is it.  When the  owner asked me to do this house portrait commission for him and I couldn’t have been happier. 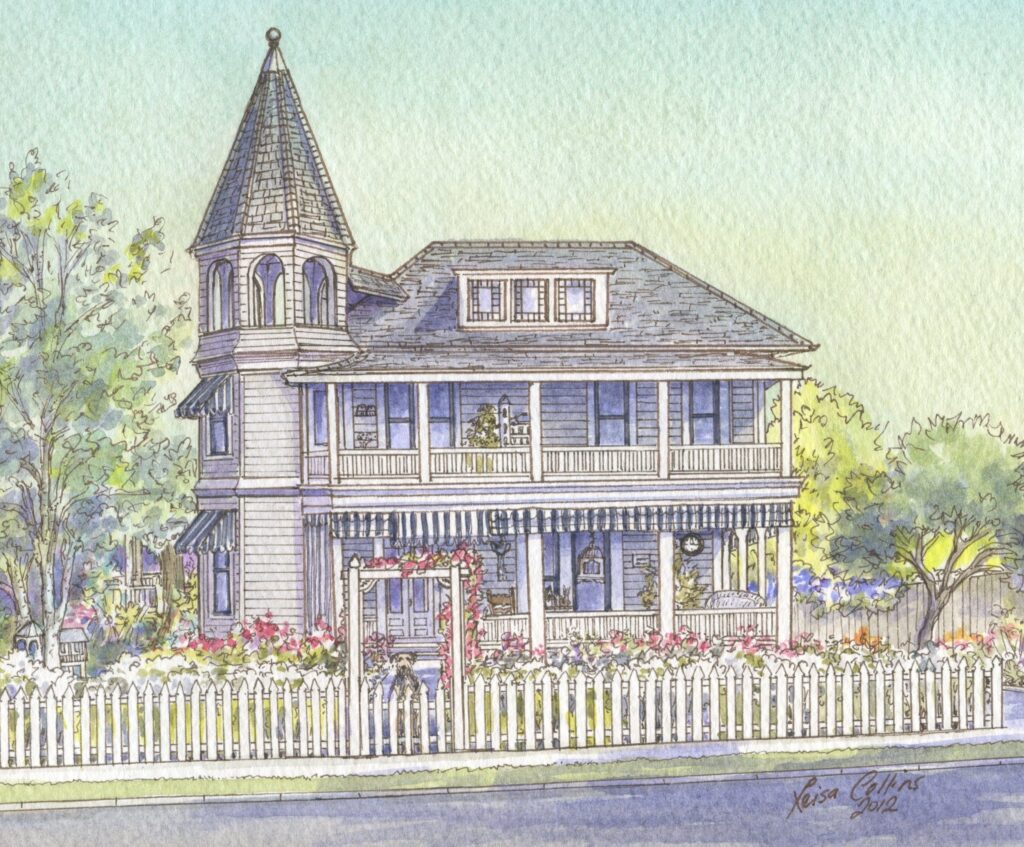 The loft studio is up there in the roof and it was quite a treat to also have our own private turret! 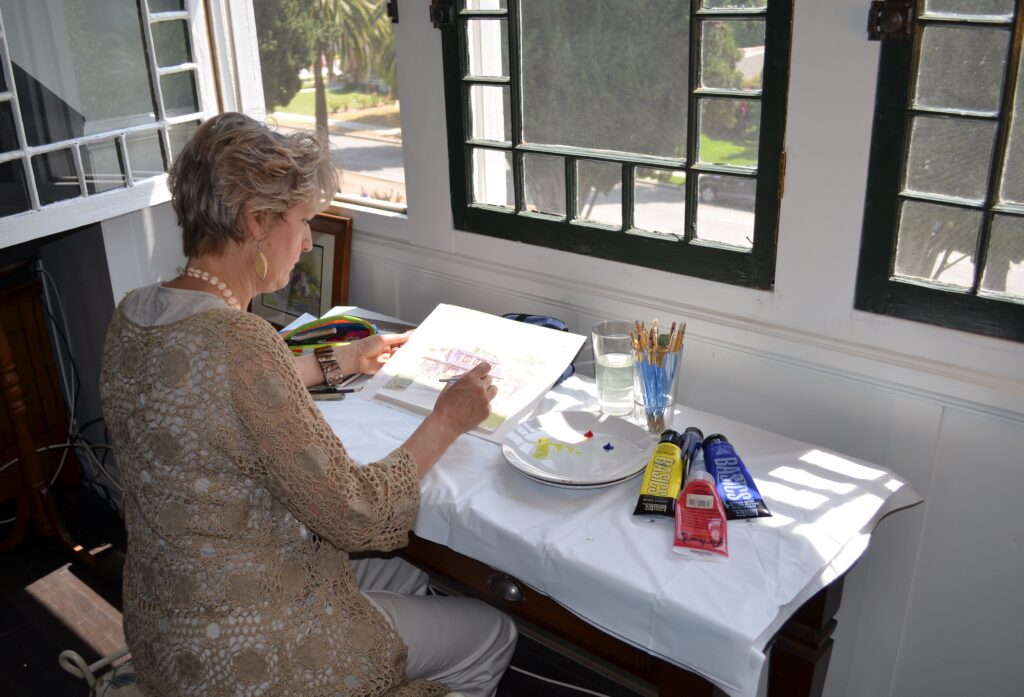 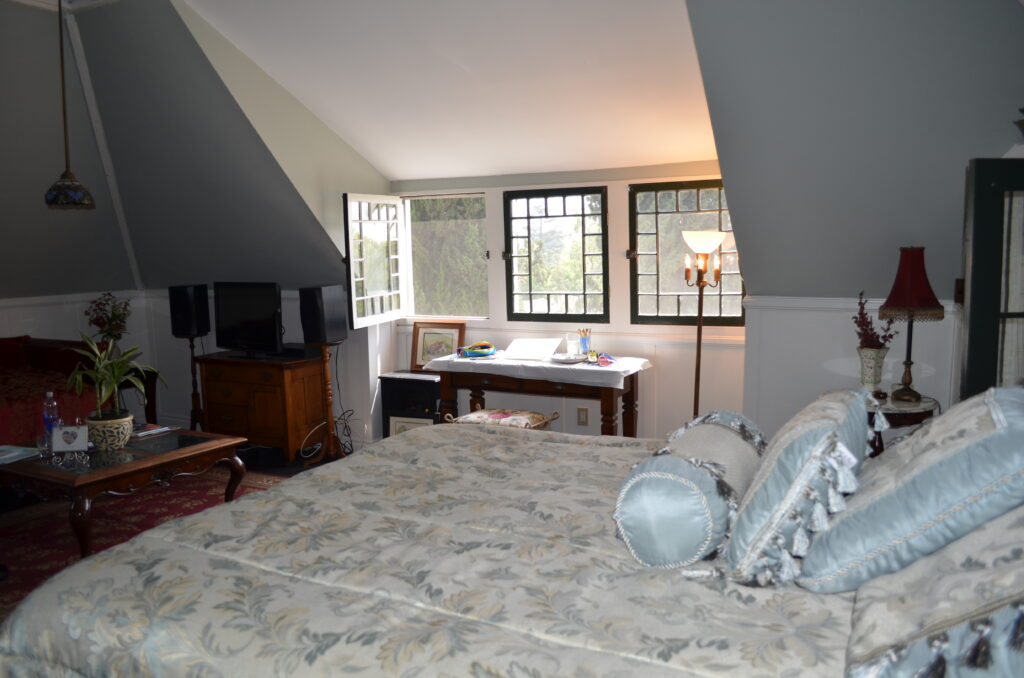 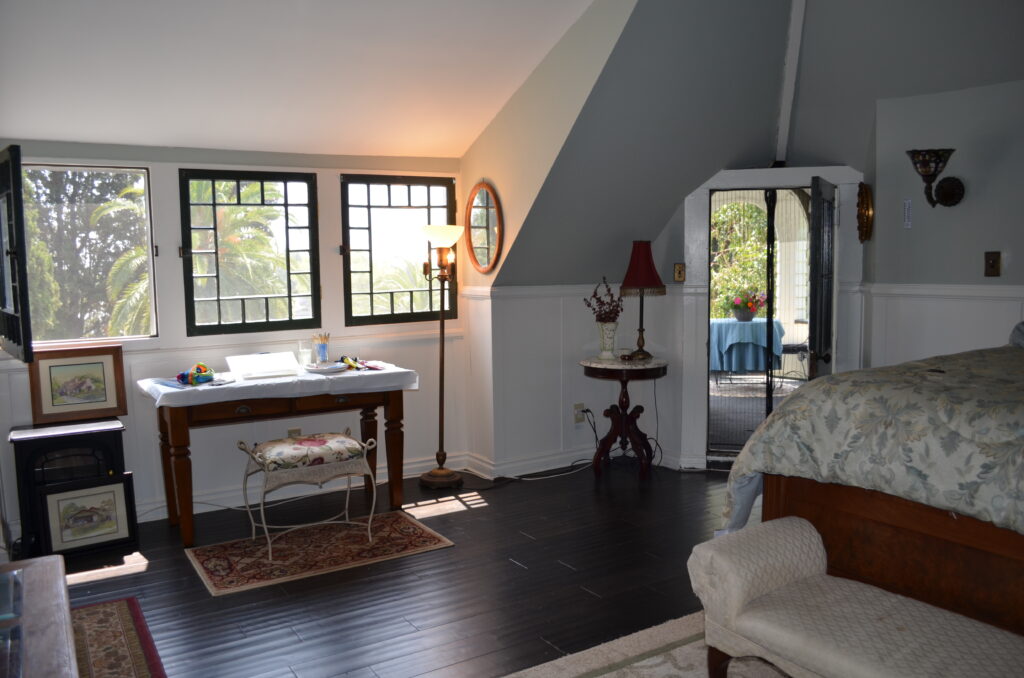 Only ten minutes from the heart of Old Town Pasadena, we found the loft on Airbnb, which is an online service that matches people seeking vacation rentals  with private people who have rooms in their home to rent. This is the link that we clicked on and it also has more photos inside the house.  http ://www.airbnb.com/rooms/411493

The homeowner, Albert Reyes, was the perfect host and he has the sweetest dog too. Her name is Duchess. (You can see her in the painting I did.) With Albert’s help I put together this little write up to provide some general information about the history of the home as I think it rather fascinating.

Tucked away in East Pasadena just above the 210 Freeway is a glorious piece of local history that few people know about. If sits on a parcel of land that was once a citrus farm, hence the name Orange Grove Blvd, a main thoroughfare that traverses the city only blocks away from this magnificent Victorian. When the city of Pasadena researched the property in 2005, it was noted that the house is only one of ten that was built before 1900 and of the ten, only one of four that still maintains its original construction.

Believed to be Believed to be built around 1893 , the home is a rare example of a Queen Anne Folk Victorian farmhouse in the East Pasadena area. What makes it a Folk Victorian is the fact that it does not contain a lot of the ornate details such as the gingerbread porches usually found in Victorian homes. However, the simplicity of the house does not take away from this Victorian’s beauty.

Little is known of its history. However, the house was lived in by long time tenant, Ms. Ingrid Adams James, from 1982 to 2005, when she passed away as a result of a brain tumor. Ingrid was instrumental in the upkeep of the property as the property manager. She was a key person in the founding of the Robert Powers Modeling and Charm School in Manhattan. After moving to the Los Angeles area, she worked to improve the lives of at-risk youngsters in the inner city. She made such a lasting impression on the current owner, Albert Reyes, that he petitioned the city to allow him to honor her memory by naming the house after her. At his request in October of 2005, the City of Pasadena passed a resolution designating the property as a landmark and naming it the Ingrid Adams James House.

The house was purchased by Albert Reyes In 2005. Albert retired from the Los Angeles Unified School District, where he was a teacher and coordinator for over 30 years. Born in Mexico City and father of three adult children, Abert is a long time resident of Southern California. His family migrated to the U.S. in the early 50’s. All but two of his eleven siblings still reside in Southern California.

Until next time, Leisa